A Review Of Ethernet Xpress Broadband Service In Goa In 2020

I started using Ethernet Xpress as my internet service provider, in Mapusa in Goa, in January 2018. The initial setup wasn't much of an issue and it worked quite well in 2018.

In 2019, I had line cuts around once a month but for the most part, the support from Ethernet Xpress was quite good. Getting through to their support team was usually more troublesome than the support itself. The issues were usually resolved within a day or two. There were a couple of instances where it took a little longer but the missed days were added on and my plan validity extended. And again, when it was working, it worked quite well.

People did have stability issues during this time, which thankfully did not affect me. There was also a weird phase where the router had to be explicitly disconnected and reconnected for the connection to be established and a normal reboot would not work during this time. And lastly, yes, the connection speeds used to depend on the IP address you were allocated but nowadays I don't think this is true. Warren has a nice elaborate post on how it all worked for him, from setup to stability, which can be found here.

Now let's get to 2020. During the initial days of the Covid-19 pandemic and the full lockdown in Goa, I was hoping the connection would remain stable and it did. Streaming worked seamlessly and thankfully there were no line cuts. Between Netflix, Amazon Prime Video and Hotstar Disney+, the last one i.e. Hotstar Disney+ is the biggest bandwidth hog and my connection supported two simultaneous streams of Hotstar Disney+.

However in August 2020 and early September 2020, there seemed to be some sort of problem with the connection speeds. It mainly looked to be a routing issue with one of the upstream providers.

Routing is the process of path selection for traffic on a network. I used Ping Plotter to check the network paths with and without a VPN enabled. The VPN I used to check was ExpressVPN, which I have been using for a while now.

Example 1: Inmotion Hosting is a popular hosting company in the US. Going by the image below (first route without VPN, second route with VPN), one thing to note is that traffic without the VPN actually has more hops. There also appears to be a bottleneck at flagtel.com which I'm guessing is one of the upstream providers for Ethernet Xpress. FLAG Telecom is managed by Global Cloud Xchange which is a subsidiary of Reliance Globalcom (RCOM). 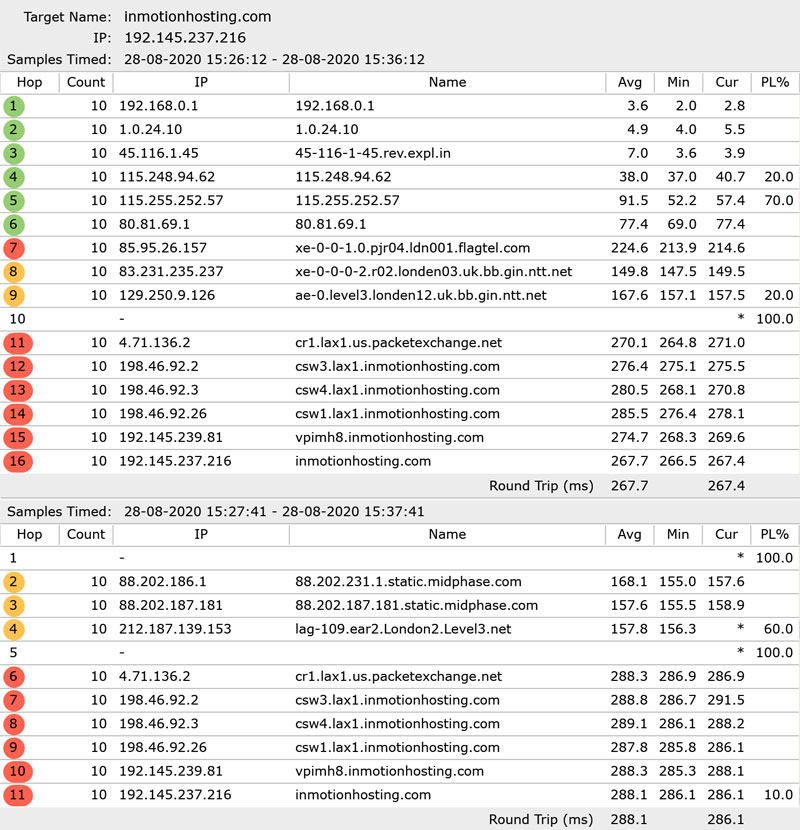 Example 2: Most of the traffic was following the above path through FLAG Telecom. Some traffic however was going through airtel.com. I used CNN to check this alternate path. The Airtel upstream does appear to behave normally and more efficiently, which can be seen in the image below (first route without VPN, second route with VPN). 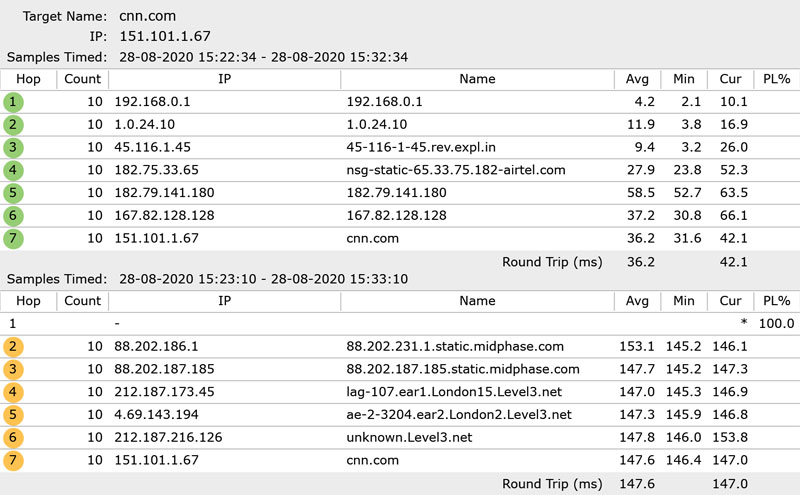 Thankfully from late September 2020, nearly all my traffic is going through the Airtel upstream and my connection speeds are quite good. Based on the information I gathered for AS134053 which is the Autonomous System Number for Ethernet Xpress and based on the IP addresses I have been allocated, my connection is mostly routed through Sagar Info Vision, Mapusa and Edgecom Telecommunication Pvt Ltd, Serula. Fingers crossed that the good upstream speeds continue.

My main router is a TP-Link Archer C6. It is a Gigabit Router, which means it is capable of theoretical wired speeds of 1000Mbps. The WAN port and the Ethernet ports on this router are all Gigabit ports.

I'm on the 150Mbps Standard Plan from Ethernet Xpress and when checking speeds, I check to Mumbai, Europe and Canada. I check to the same locations and to the same servers in those locations, to get more uniform results.

Now all the devices cannot be wired to the router. This is where the local Wi-Fi network comes into play. Setting up this local network properly, is thus equally as important, so that all the devices make the most of the broadband connection speeds.

The faster 5GHz Wi-Fi (not to be mistaken with 5G, which are 5th Generation cellular networks) handles the network speeds quite well.

There is a slight drop in connection speeds compared to the wired network speeds but that's understandable and acceptable. The main issue with the 5GHz Wi-Fi is that its range is terrible. This is where the slower 2.4GHz network comes into play.

The slower 2.4GHz Wi-Fi has a much better range compared to the 5GHz Wi-Fi. When I say slower, it should still have enough bandwidth to cover the speeds of my broadband connection.

However one device which is my Samsung Galaxy S7 phone causes this network to have a few issues (more on this a little later). So to accommodate all devices my 2.4GHz network has to run in mixed mode and the speeds are just ok.

The problem with the Samsung Galaxy S7 appears to be that it cannot authenticate using WPA/WPA2-Personal with AES, it requires WPA/WPA2-Personal with TKIP. If I select the 2.4GHz network on my router to only run 802.11n, then the TKIP Encryption is disabled. It only is enabled if I run a mixed 802.11g/n network.

Now my Samsung Galaxy S7 does support 802.11n so theoretically it should run those speeds but it seems to be slowing the whole network down to 802.11g speeds. I've not completely understood this issue, so if anyone can shed some light on this, please do leave a comment.

Just to rule out any other issues, I've checked all channels and settled on channel 8 for no real reason, they are all clear. WMM option on my TP-Link router is disabled, True Nat Boost is enabled and QoS is disabled. I think it's time for a new phone.

Since the range on the 2.4GHz network is better, I've extended this network to the lower part of my house, by setting up a WDS Bridge. I use a TP-Link Archer C60 to setup the bridge.

The setup is quite simple, survey the available networks to bridge, select, enter password and it works seamlessly. You need to make sure you assign an IP manually and turn DHCP off before you bridge. I've only bridged the 2.GHz network.

Mesh Routers - do you need them?

With the Covid-19 pandemic and with more people staying / working from home, Mesh Routers have caught a lot of attention this year. A Mesh Router System has one main router and multiple satellites / nodes which create one large network. It's a simple out of the box solution but these systems are very expensive. For the system I have in place, I think my cost would have tripled and I would not have had the same control.

A simple extender can work just as well if done / placed properly. I use a TP-Link RE305 to extend the 2.4GHz and 5GHz network to my room. The newer devices from TP-Link come with One Mesh support, so network names remain the same and handoff from one network to the other is quite seamless.

Ethernet Xpress' broadband connection here in Mapusa, is working quite well for me in October 2020. I will continue to update the SpeedTest tables in the coming days, to make sure everything is working properly.

I've also spent a little time setting up my internal network, making use of WDS Bridging and Mesh Support. I'm running both the 2.4GHz and 5GHz Wi-Fi networks and I've split my devices across these two networks. The Smart TV and my main computer connect via the 5GHz network and the Amazon Fire TV Stick connects via the 2.4GHz network. The mobile devices have more freedom.

I spoke too soon and jinxed myself. The connection speeds over the weekend have been quite bad. I've updated the SpeedTest tables above. From this point onwards, I'm only going to update the Wired SpeedTest results and 5GHz SpeedTest results.

I was allocated the IP address 103.97.93.0 at some point over the weekend. I've never seen a real world example of an IP address where the last octet is 0. It is technically a valid address, just a weird one.

I will continue to update this article from time to time but will do so more randomly instead of daily, as the whole process to document the connection speeds is a little time consuming.

The connection speeds still appear to have the odd day where they don't perform as effectively. However the not so good days are less compared to before. From this point onwards, I'm only going to update the Wired SpeedTest results.

Coming to 2021 and my Ethernet Xpress broadband connection is still working quite well. I did have a line cut recently but the issue was resolved within a day and the plus was the IVR finally accepts complaints directly without me having to speak to someone. For some reason this was not working for me last year.

Cyclone Tauktae hit us quite bad, we had no electricity for 4 days, but surprisingly when the electricity did come back my Ethernet Xpress broadband connection was working. However the following day there was a line cut but that was seen to promptly and my connectivity was restored in a little over 24 hours. I know there are people who are still experiencing connectivity issues due to the after effects of the cyclone, so I do consider myself lucky here.

Carl Costa
Cosme Costa and Associates
Goa, India
It's been a real pleasure working with Captiverra Tech, their professionalism, helpfulness and approachability in working together to deliver the website on time is remarkable! Looking forward to a continued successful relationship in the years to come.
Let's Get Started
On Your Project
We help you increase your online presence and grow your business

27th Aug
2020
A Review Of Ethernet Xpress Broadband Service In Goa In 2020
A look at how my Ethernet Xpress broadband connection is working for me and how I optimized my local network to maximize speeds.
READ MORE